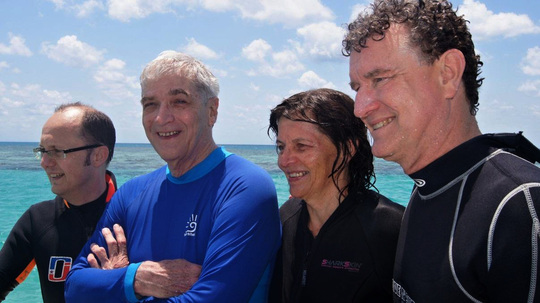 45 years ago this month, a biological survey team of volunteers were diving on Ellison Reef, off Mission Beach in Far North Queensland, to gather the scientific evidence they needed in order to prove that it was a living reef and should not be mined for coral limestone.
This group of conservationists won their case; successfully disproving the argument that Ellison Reef was ‘dead’ and that its exploitation would not endanger any living coral, thus setting a precedent for the protection of the whole Great Barrier Reef.

Last Sunday, original diver Eddie Hegerl returned to Ellison Reef, now part of the Great Barrier Reef Marine Park and World Heritage Area, along with Australian Conservation Foundation Chief Executive Don Henry, to celebrate this turning point for the world’s largest living ecosystem.
“It was wonderful,” said Mr Hegerl. “We actually saw some of the same places I saw in 1967. It was a great experience, it really meant a lot.”
Mr Henry said it was a wonderful honour to have Eddie back at Ellison Reef, to honour and celebrate what was achieved back in 1967.
“The story of the Reef is really a story about people; people who love something and stood up and fought really hard for it. We’re here today to honour that. And the best way we can honour that wonderful contribution is to rededicate ourselves as Australians, to protect the Reef,” said Mr Henry.
After snorkelling on Ellison, Don and Eddie were also joined by Brenda Harvey, wife of Perry Harvey the boat operator responsible for transporting the 1967 team out to Ellison, who said it was good to hear from them that Ellison is looking great and that her husband Perry would be “very pleased to hear it.”

Despite 45 years having passed, Mr Hegerl said that he can still remember in detail his first Ellison Reef dive with the survey team of volunteers.
“It was really, really impressive,” said Mr Hegerl. “I did a scuba dive on the north-east wall, on the end of the reef and if you put your arms out like you’re parachuting and let your weight carry you down, you could see, probably a hundred or two hundred species of marine invertebrates that hadn’t yet been described by science.
“We didn’t collect them because nobody [in the 1967 survey team] could have identified them. There wasn’t anyone with specialist expertise in that group. And to merely say we had found 200 unidentified invertebrates would have sounded a bit stupid. It wouldn’t add anything to the credible stuff we could present.”

Out on the reef, Eddie and Don were joined by representatives of the Wildlife Preservation Society of Queensland (WPSQ), the Great Barrier Reef Marine Park Authority (GBRMPA), the Australian Marine Conservation Society (AMCS), Mission Beach Tourism, local conservation organisations and Terrain NRM, the Natural Resource Management body for the Wet Tropics.
“The Wildlife Preservation Society of Queensland and the Queensland Littoral Society (now AMCS), were both newly formed organisations in the 1960’s and they drew together like-minded people from across the state,” said Suzie Smith, President of WPSQ Tully.

“John Büsst was a leading figure in both these groups and he drew on the campaigning strengths of WPSQ member Judith Wright, the WPSQ network from the Gold Coast to Cairns, and the scientific support of Eddie Hegerl and Don McMichael [the then Director of the Australian Conservation Foundation] to argue successfully in court.”
"The decision not to mine the Great Barrier Reef was visionary – and those who fought hard for its protection should be applauded,” said GBRMPA Chairman Dr Reichelt.

“A trip to Ellison Reef, the birthplace of the Great Barrier Reef Marine Park, has all the hallmarks of an authentic new tourism experience. That’s what people are looking for and want to immerse themselves in.”
But WPSQ’s Suzie Smith said that although in the 1960’s, the Great Barrier Reef faced the dangers of mining and drilling, presently it is faced with the results of 40 years of rapid development in the catchments bordering the Reef.
“Measures to mitigate the problems outlined so starkly two weeks ago by the release of the Australian Institute of Marine Science report have been too little too late. Coupled with the government’s push for port development and increased tanker traffic, the Reef is at another critical point.”
“The big threat to the Reef in those days was mining of the Reef and we won that one,” said Terrain NRM Chair Mike Berwick.
“Now a big threat is pollution from land-based sources and Terrain is very proud to be playing a central role in helping change that, in large part, through the Australian Government’s Reef Rescue program.”

Over the last five years, Terrain has worked with over 1,700 farmers and graziers in the Wet Tropics region to help reduce nutrients, pesticides and sediments entering nearby waterways, which helps improve water quality entering the Great Barrier Reef lagoon.
“Along with the other Reef catchment NRM bodies and industry groups, Terrain has submitted an application to continue Reef Rescue beyond 2013 to ensure ongoing water quality improvement in the Reef lagoon and to help reduce future Crown of Thorns starfish threats to coral,” said Terrain’s CEO Carole Sweatman.
GBRMPA’s Dr Reichelt said, “While we all recognise that there are pressures on the Great Barrier Reef today, it is still one of the world's great natural wonders — something that's held in awe by millions of visitors each year and valued by people all around the world.”
Terrain NRM is responsible for coordinating the 45th Ellison Reef Anniversary event, and looks forward to continuing to work with government, regional NRM bodies, tourism, agriculture, industry and conservation partners, to ensure the health of the Great Barrier Reef in to the future.